Europa's trip to Silverdale in the Waggoner Cruising Guide newsletter

Click here to see my short piece in the latest Waggoner newsletter about Europa's visit to Silverdale.
Posted by Janine at 2:11 PM No comments:

Cruising the Hood Canal is a long haul. Would we do it again? Youbetcha. We would stay longer at Alderbrook for sure, and check out some of the anchorages in the canal. We’ve heard some people call it boring, some say it’s beautiful. I guess I think it’s a little of both. There are miles of uninterrupted forest and low boat traffic. The amount of wildlife didn’t wow us, and the ubiquitous Olympic Peninsula logging operations create a scarred landscape – clear cuts everywhere you look. I think an extended stay at Alderbrook with some boating friends would be a blast! What do you say, peeps?

The resort is quite nice – although most things like the pool and bar are not open right now. We went for a short but lovely hike across the street in their private, nicely maintained trail system.

We stayed just the one night at Alderbrook because the shrimpers were coming in and we thought we would regret being there when things got crazy. So, we took off Thursday morning for yet another new-to-us destination.

Port Gamble is a great anchorage although there is no good access to town. There is a beach that we were able to land our kayaks at, right at the former mill sight. It’s a beautiful spot and I hope they do something awesome with it. The town itself is about the quaintest we’ve seen. Great general store, the restaurant looked good, and there are nice shops.


We were one of very few boats in the harbor. It was nice to be on the hook again.

On Friday we left Port Gamble for the Shilshole Marina – another new location! The marina is very nice…very big. We took a short walk and then took a short paddle into the mouth of the ship canal. It was quite breezy and had to paddle hard to get back in the marina. The area was crowded, and frankly, there were too many people not wearing masks.

We would go back to Shilshole, I think, some day when we have more time to walk and enjoy restaurants and parks.

I meant to include this photo weeks ago – our boat plant. Last summer this pot contained rosemary, which was nice but we didn’t use very much. This summer we decided a nice flowering plant would be better. So far, the Nasturtium is doing well in the sea air! 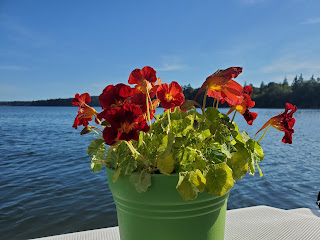 On Saturday morning, we decided that given the weekend weather forecast, and our proximity to the Foss Waterway, we would head for home…a few days earlier than originally planned. 25 nights on the boat!

In a couple of weeks we’ll head out again, north to the San Juan Islands…hopefully!

Posted by Janine at 8:47 AM No comments:

We had a nice cruise south from Port Townsend. We saw a lot of porpoise…and a lot of crab pots. 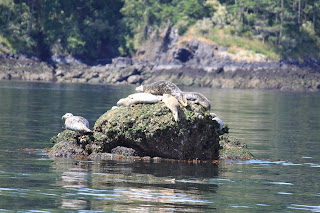 On the way to the Hood Canal, I decided to check out what the Waggoner Cruising Guide has to say about the Pleasant Harbor area. We were unaware there is a state park there, so we cancelled our reservation at the marina and pulled into the very small state park dock at around 3pm (it was a relatively long cruising day for us, around 35 miles). There was a local gentleman at the dock when we arrived and he told us the park had just opened 20 minutes earlier! He left and then we were the only boat there.

Here’s what we think: It’s a fine place to stop but not much going on. The state park is just the small dock and some restrooms. We attempted to walk to the marina but decided to kayak instead, as the only way there is on the extremely busy highway.

We never did make it in to the marina office – the restaurant is closed so we just paddled around. I found the proximity to the highway a major negative – truck fumes and noise. Other than that it was quite peaceful.

Kingston is home to many giant Adirondack chairs – photo ops, of course.


The BBQ dinner from the Alehouse in Kingston was very good - and I finally found a salon opening and got in for a much needed haircut!

The Ranger Tugs gathering was fun. We talked with Andrew about options for getting a bigger/better boat - we'll see...

We got news (and a video!) on Father’s Day that Mac is crawling!

We arrived at the Point Hudson marina in Port Townsend on Sunday as the weather steadily improved. We are astounded at the expansive beauty of this place. So many mountains!

We walked through town and made a trip to Safeway for a few grocery items. (Quite a walk – 3.4 miles.)

Monday was a busy day. We kayaked out around the breakwater to watch Steve Z. and his friend scuba dive. They didn’t see too much – “low viz” (diving term). 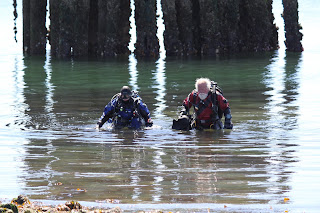 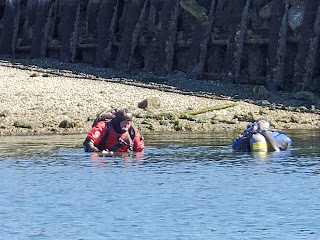 After lunch we took another long walk out to Fort Warden. We took the beach route there, then came back through town.

It’s now Tuesday (June 23) morning and we will leave in a bit. The Z’s are heading Coorie Doon to the barn, and we will go south into Hood Canal – another first for us.

We departed Poulsbo on Wednesday for Edmonds. Guest moorage at the Edmonds Marina is sparse but both boats were able to get spots in front of Anthony’s. It’s a fun marina, with lots going on – fishing boats hauling in, lots of boat traffic, and the Puget Sound Express (large whale watching boat).

We walked around town, went to the beach (and the dog park for Gus!), and had lunch at Market. I had my first sushi burrito – yum!

Took a couple of paddles through the marina and tried very hard to get in somewhere for a haircut. (My pandemic hair is driving me crazy.) Nothing doing – all salons booked.

We left Edmonds on Friday morning, arriving in Kingston after a very short cruise across the passage. We are here for a small Ranger Tugs gathering. The group is invited to the Kingston Yacht Club’s Summer Solstice event at the marina park. There are twenty plus boats, including about half of the 41’s that are currently on the water.

This morning, June 20 (happy 34th wedding anniversary to us!), marina staff delivered donuts to the dock! It’s raining off and on and we are hoping for clearing weather for today’s event.

Posted by Janine at 9:01 AM No comments:

The forecast calls for a sunny day in the upper 60’s – yahoo!

We took a couple of nice paddles yesterday around the marina and up to the head of Liberty Bay. Always fun to see the Z’s with Gus on board their kayak!


We were delighted to see this old, original Ranger come into the marina. The guy driving it came around to check in with us other Rangers. (I am fairly certain this is the guy whose wedding we inadvertently took part in here on New Year’s Eve two years ago!) 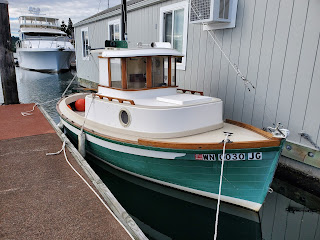 Posted by Janine at 9:28 AM No comments:

We spent a couple of nights at the city park dock in Eagle Harbor. There were zero boats there when we arrived. Took a few really nice walks with the Z’s. 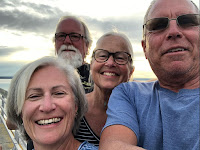 On Sunday the two boats left Eagle Harbor for Bremerton. (First time visit for the Z’s.) Plenty of guest moorage. Unfortunately, the museums are still closed, but we did take a nice walk out to Manette to have lunch at the Boat Shed.

Spent just one night in Bremerton, then headed back to Poulsbo for a couple of days. The weather is supposed to be better starting today, Tuesday June 16. Hopefully, we’ll be able to get the kayaks out.